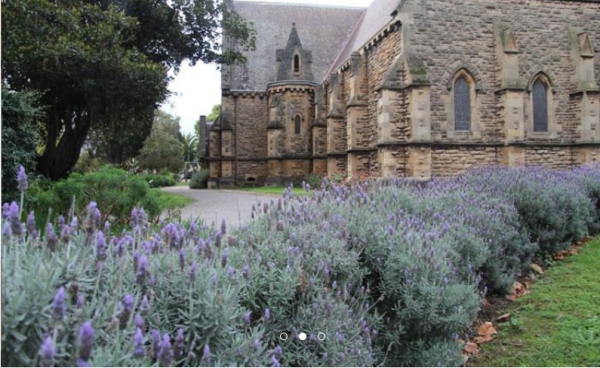 EVENT CANCELLED - in keeping with current medical advice, the book launch has been cancelled.

The book, by Jenny O’Donnell and with a forward by the Archbishop of Melbourne, reveals the story behind each of the church's  many memorial stained glass windows, which celebrate the lives of prominent and less prominent citizens of early Melbourne. It will be launched by Dr Andrew Lemon OAM and copies will be available for purschase on the day. We welcome everyone to this important event.

In the 1850s St Kilda was the wealthiest of Melbourne suburbs and a fine stone church, a rare example of the work of Charles Swyer, was erected in Acland Street in 1854. Built of Sorento sandstone, it was the first stone church south of the Yarra and was consecrated in January 1863, complete with now heritage registered organ originally by William Hill of London

In 1870, the many wealthy parishioners desired to beautify the church and five lustrous windows by leading stained glass makers Ferguson and Urie depicting the life of Christ were installed. In 1874 parishioner and St Kilda city surveyor Sydney Smith drew up plans for extensions and the first two memorial windows were installed. 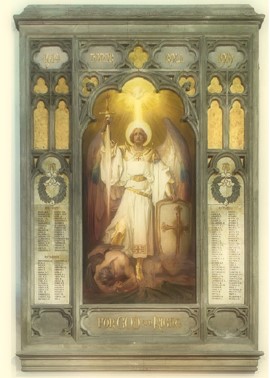 The book provides detailed biographies of each person, among them Francis Grey Smith snr and his wife Susannah each remembered in three light windows with quatrefoils above in the transepts. Jesse Fanning, an early citizen of St Kilda, is another who features in the windows as well as Mathilda Murphy who ran one of the first schools for girls.

There are also many brass and marble tablets, one in particular in memory of prominent churchman, Laurence Adamson, “the lion of Wesley”, and another to Alexander McConachie who did much to improve the standard of church music in Australia.

After the Great War a poignant memorial, designed by George Dancey with architect Norman Peebles, was erected in the Chapel of St Michael. The Gothic Revival memorial features a large central panel of a painting, by Dancey, of St Michael, with the names of 162 service personnel on panels on either side. The book includes biographies of these people (and their close relatives who, for one reason or another, were omitted from the Roll of Honour). Using archival material, the book also illustrates the experience of the Great War at home and abroad, in both pictures and personal letters.

It includes a brief history of the church building, architects’ biographies, renovations and additions, as well as the biographies of over 220 people associated with St Kilda.  It contains over 120 pictures including portraits, plans, posters, historic photos, contemporary photos.