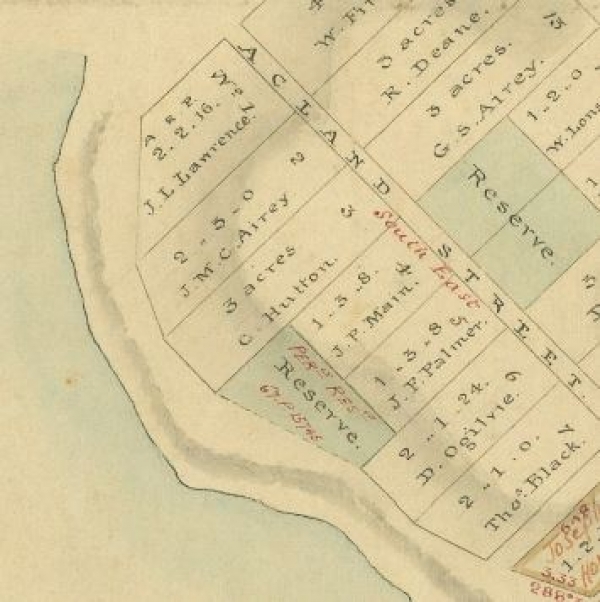 Politician, grazier and land speculator, John Airey was born in London about 1809, the second son of Sir George Airey. His maternal grandmother was Margaret O’Reilly Talbot the 1st Baroness Talbot of Malahide. He entered the Royal Navy in 1821 becoming a lieutenant in 1829. Following the end of his active naval career in the late 1830s, he travelled to Australia and in 1847 entered the New South Wales Legislative Assembly as the member for the Port Phillip District.

He obtained a pastoral lease near Anglesea in 1839 and another at Airey’s Inlet in 1842. The latter settlement now bears his family name. He operated these and other pastoral properties near Geelong until the 1850s and 1860s.

At the Government land sale conducted on Wednesday 7 December 1842, John Moore Cole Airey paid £205 seven shillings for an urban allotment comprising two acres three roods and four perches, being Lot 2 in the new village of St Kilda in the Parish of South Melbourne, a block located on the Esplanade somewhere between the modern-day Pollington and Victoria Streets. His brother George Sherbrooke Airey purchased Lot 13 on the future corner of Acland Street and Eildon Road. Both brothers received a remission on their purchase price by virtue of their Royal Navy service.

By the early 1870s John Airey was living in England and later moved to Portugal. In 1851 he married Amelia Walsh in London – her father was prominent Lisbon merchant George Dennis Walsh and it may have been this connection which brought Airey to Portugal where he was appointed Viscomte de Airey of the Kingdom of Portugal.