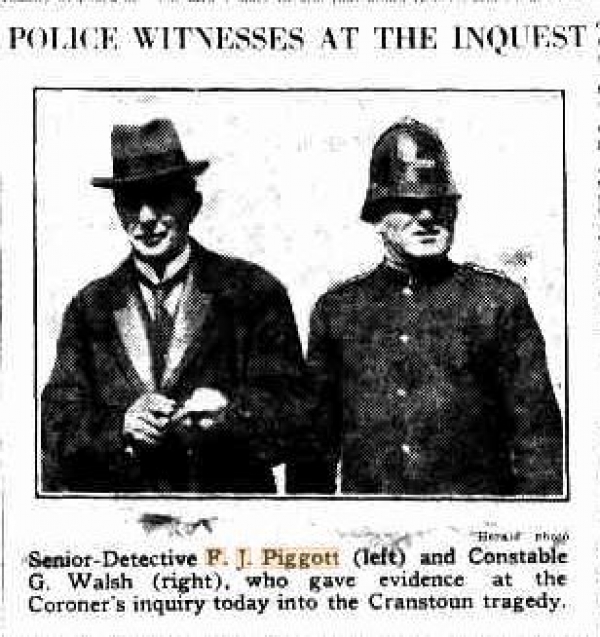 Frederick Piggott, a resident of Godfrey Street St Kilda for over forty years, was born on Phillip Island on 1 April 1874. In 1893 he graduated from Melbourne’s Working Men’s College as a joiner and cabinetmaker and in his spare time he joined the Melbourne Garrison Artillery comprising citizen recruits trained for homeland defence.

In 1898 he became constable number 4713 with Victoria’s Mounted Police, earning six shillings a day. He enjoyed several country police postings at Rutherglen, Glenrowan, Harrietville, and Eldorado until 1904 when he and his wife Matilda and their three children settled at Avenel. It was during his country sojourns that he developed a keen interest in photography, photographing much of country Victoria and its people including Ned Kelly’s elderly mother.

While stationed at Avenel, Piggott passed his Sergeant’s examination and in 1912 he entered the Criminal Investigation Bureau at Russell Street. For the next twenty years he investigated an extensive array of crimes including fraud, robbery, murder and whatever Squizzy Taylor got up to.

In 1916 he was called out to Gippsland to investigate the apparent shooting murder of Isabella McMichael at her home at Heyfield. Piggott took photos of the crime scene with particular attention to the blood stain patterns. His images are Australia’s earliest example of photographically documented blood spatter analysis and pioneered the presentation of such evidence in murder trials. He had to use his own camera as Victoria Police did not have an official photographer or a photographic department.

In 1917 he arrested Charles Goodwin the ‘Prince of Swindlers’ and Richard Gilmour, leader of the Gilmour Gang, the latter arrest piquing Piggott’s interest in finger print analysis.

About this period he helped establish the Victorian Police Association becoming its first Vice-President. In 1920 he was chosen to accompany the Prince of Wales on his Australian tour.

Piggott achieved huge success with the 1921 conviction of Colin Ross for the murder of schoolgirl Alma Tirtschke in Melbourne’s Gun Alley. Prior to Alma’s burial, Piggott took a sample of her hair and subsequently compared it to hair fibres he found on a blanket belonging to Ross. The State Government Analyst determined that the blanket hairs were Alma’s. It was Australia’s first trial to obtain a conviction using hair comparison analysis.  Ross was found guilty and hanged.

In 2008 Ross was granted a posthumous pardon when modern forensic scientists proved the blanket hairs were not Alma’s.

Mrs Matilda Piggott died at her Godfrey Street home on 11 December 1922 and twelve days later, the Piggott’s only son, Frederick died in a motor cycle accident. This was the same year he investigated the horrific Cranstoun murder suicide where eight people were poisened, five of them dying.

1924 saw Piggott investigating another traumatic schoolgirl murder. The body of Irene Tuckerman, aged eleven, was found wrapped in a bag and abandoned at the intersection of Khartoum Street and Inkerman Road Caulfield. Despite exhaustive enquiries, the murder was never solved.

Travels to the US and Europe to study forensics

Piggott was promoted to Sergeant First Class in March 1926 and soon after, he and his second wife, Alice, took off to America for three months to study police methods on behalf of Victoria Police. They visited San Francisco, Chicago and New York before sailing to England to spend six months with New Scotland Yard. He sent weekly reports to Thomas Blamey, Chief Commissioner of Police detailing police education standards, recruitment, training, specialisms and investigation techniques involving ballistics, fingerprints and indexing systems.

In 1933 he was promoted to Police Superintendent and in 1934 he retired. In retirement he gave lectures and was the electoral North Ward Returning Officer for St Kilda Council. He continued living at Godfrey Street until about 1960 when he moved to Mildura to be with his daughter Hilda. He died and was buried at Mildura in 1962.

Despite being party to the Colin Ross miscarriage of justice, Piggott is nonetheless remembered for his pioneering forensic work in being the first to apply crime scene photography, blood spatter analysis and hair comparison analysis as evidence in Victoria’s criminal murder trials.