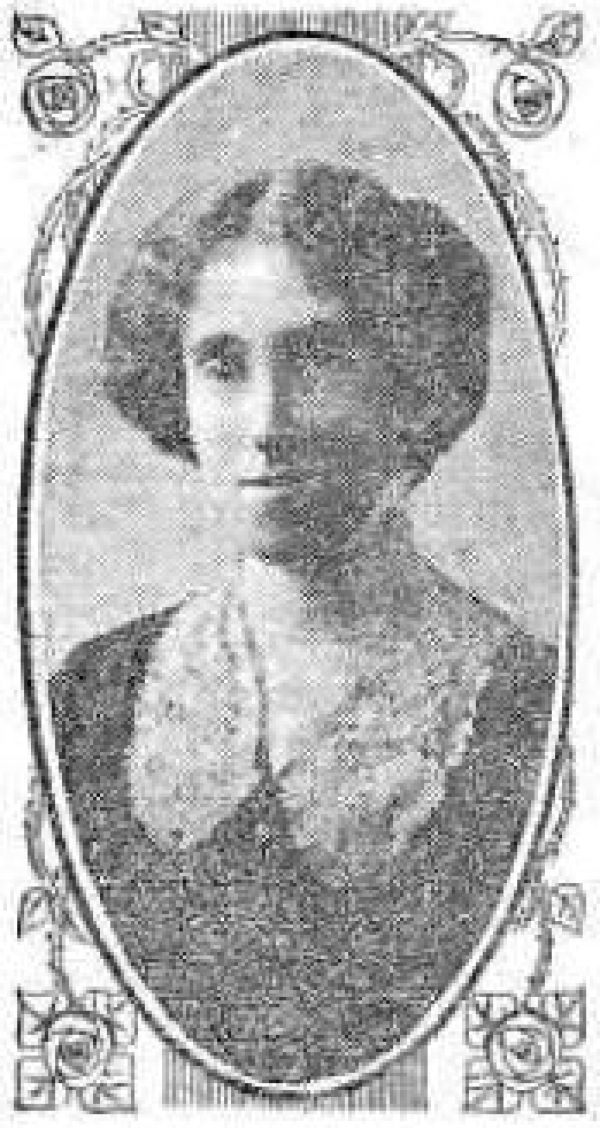 Dora de Beer made a considerable contribution to Melbourne’s intellectual and artistic life in the early 20th century, particularly involving herself with organisations which furthered opportunities for women.

Dora was born in Dunedin New Zealand in 1879, the daughter of Solomon de Beer, an Otago based merchant and Sophie Jacobs, sister of Isaac Jacobs of St Kilda.

The family moved to Melbourne in about 1883, living in ‘Otago’ 12 Charnwood Road St Kilda with ‘Granny Jacobs’, ancestor to many of St Kilda’s Jewish families. From the early 1900s the family lived at 5 Cintra Avenue St Kilda and prior to WW1 they lived at 71 Barkly Street before returning to Cintra Avenue.

In 1897 Dora passed her University of Melbourne matriculation exams as a student of the Girls High School Acland Street St Kilda which may have prompted her, in 1899, to become Honorary Secretary for the St Kilda branch of the University Extension Movement, organising public lectures on a range of subjects. The lectures were open to all men and women regardless of rank or education. The movement was a precursor to organised adult education, and especially useful for women who otherwise didn’t have access to a university education.

On 24 September 1910, Dora was one of nineteen women who met at Sargent’s Cafe Melbourne to form the Catalysts Society. The Society was intended as a precursor to the Lyceum Club, however the participants so enjoyed their discussions that the Society continued to meet long after the Lyceum Club was established. The first paper was presented by poet and university lecturer Enid Derham on the works of Thomas Hardy.

Melbourne’s Lyceum Club came into being in March 1912 when 25 of Melbourne’s influential women, including Dora, met in a rented room on the corner of Elizabeth and Collins Streets. Their aim was to provide an environment to further women’s educational, intellectual and career interests similar to men’s elite clubs where members could network and establish professional contacts. Dora was the Lyceum’s Honorary Secretary for many years and in 1919 became vice-president.

About the time Dora and others were founding the Lyceum Club, she was also the Honorary Secretary of the Arts and Crafts Society of Victoria which operated from club rooms at 527 Collins Street. The Arts and Crafts Movement developed in Britain in the late 19th century and emphasised the use of high quality materials and simple, less mechanised design. The Society was established in Melbourne in 1908 and had the architect Desbrowe Annear as a founding member.

Dora’s membership of the Society is curious because from about 1911 to 1914 she and her family lived at 71 Barkly Street St Kilda, a house in the Arts and Crafts style probably built about 1910 following the demolition of ‘Emilton’. It would be interesting to know whether she or Desbrowe Annear had a hand in its design.

Dora recruited members and organised exhibitions of Arts and Crafts artwork at the Society’s rooms and at the Melbourne Town Hall and was involved with the Society for about 10 years.

She travelled through Europe in the early 1920s and explored Italy with Dr Constance Ellis – the first woman to graduate with a medical degree from the University of Melbourne and fellow member of the Lyceum.

It seems she had a bookshop because in November 1926, it was announced in the Argus that Dora was relocating her Everyman’s Lending Library and Bookshop in South Yarra to Collins Street. It became the Everyman’s Lending Library, Bookshop and Travel Club after she introduced a travel section filled with travel and guide books, maps, hotel directories, and transport directories. She encouraged her friends to send postcards on their travels giving useful hints about accommodation, transport, luggage facilities etc. which she then shared with her customers. The Travel Club targeted independent women with the time and money for leisurely travel. Ladies could relax with a cigarette and a cup of tea while listening to travel talks and watching movies of foreign beauty spots.  She cleverly promoted the bookshop, giving public lectures at the YWCA and The Victoria League on the modern novel and in 1930 had an afternoon spot on Radio 3DB talking books.

Upon returning from another trip through Europe with Constance Ellis in 1929, Dora started promoting art exhibitions at the Everyman’s Library with an exhibition of Italian handicrafts. In 1932 an exhibition of linocuts was followed by a showing of pottery works by Marguerite H Mahood. This may have been Mahood’s first pottery exhibition – her work is now represented in all of our State and National Galleries.

From 24 May to 7 June 1933 the library sponsored a painting exhibition for Mrs E Phillips Fox, better known as Ethel Carrick. Ethel, a post impressionist, was initially associated with the Heidelberg School. One of her paintings sold in 1996 for over $100,000, a record for an Australian female artist at the time. 1933 also saw the library hosting an exhibition of paintings by St Kilda-born Rupert Bunny. This was his first exhibition after returning to Australia from Europe following his wife’s death. The following year the Travel Club exhibited 1930s travel posters.

Dora travelled to Europe in 1937 and was interviewed by The Age in October 1938 in an article headed ‘Impressions of Life in Germany’. She was in Munich during Mussolini’s visit and marvelled at the clean-up wrought on even the shabbiest house. She thought younger Germans were fanatical in their support for Hitler but that older people were more cautious. Her ambivalence comes through in her strong admiration for the country’s perfect functioning tempered with alarm at the wholesale regimentation and militarisation of its people - everyone was extremely careful in what they said or did.

Dora was over 60 in 1940 when she was back on the radio at the ABC delivering a travel talk titled “Through the Dardanelles to the Black Sea”.

Dora appeared on many committees, frequently as Honorary Secretary, a euphemism for work-horse, gathering members and subscriptions, organising meetings and exhibitions. One gets the impression that she was often the one behind the scenes energetically and actively supporting her chosen organisations.