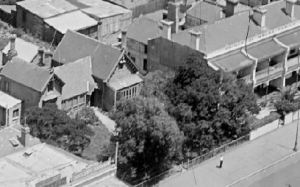 Preceding Robert Russell in his advent in the colony, but not in his beginning of architectural practice, was Samuel Jackson, another fine old pioneer of architecture in Melbourne. Born in England in 1806, he went early to Van Diemen's Land and settled in Launceston as an architect and builder. When John Pascoe Fawkner began to organise a party to exploit the country across Bass Strait, Samuel Jackson became an enthusiastic member, and though he did not himself make the crossing in the first trip of the Enterprise, his brother William did. He brought back glowing stories of the possibilities as a sheep raising district of the country around Port Phillip. He had been warned off Batman' territory by John Helder Wedge, but he had laid claim to a situation beyond d, about 20 miles from Melbourne on the Saltwater River. To it Samuel and William Jackson immediately went. It was a fine tract of pastoral land in the vicinity of Sunbury where Jackson's Creek perhaps unconsciously perpetuates their name. There they settled in comparative isolation, happy in their pastoral pursuits, and there Samuel remained for four or five years. His only outlet for architectural expression was in the erection of his own dwelling.

Despite success in other occupations, a true architect can never excise from his life the desire to build. So we find Samuel Jackson, in 1840, setting himself up in offices in Melbourne, while his brother continued in charge of the Saltwater River estate. Samuel Jackson had = watched Melbourne grow, and he saw that the time was ripe for its architectural life to begin. So he sat in readiness in Little Collins street waiting= for work to come. He realised that building in Melbourne was necessarily restricted by the scarcity of materials and lack of skilled workmen an= d suitable machinery. Palaces and cathedrals were beyond the bounds of possibility. Nor were they wanted: the pioneer community needed shelter first, and it was the business of the architect to give it this subordinating beauty to economy to the best of his artistic ability. On such lines Samuel Jackson worked and he found much success during the ensuing 10 years..

The Roman Catholic community provided him with his fast opportunity in its temporary brick church, which was immediately followed by the St. Francis's of today. The erection of St. Francis's was a protracted process, extending over four years, progression being proportional to the spasmodic inflow of the necessary money. It was finally opened and dedicated on October 24, 1845, and it remains to this day an import= ant link with the past. Time has not been as kind to it as to St. James's. = Paint his robbed it of that uneven texture which gives scope for play of light and shade, and the softening effect of trees and greenery have been removed. Nevertheless it will bet deeply regretted if such an historic church = should be lost to Melbourne. In 1841 Mr. Jackson built the first Scots Church, forerunner of the noble building now on Collins street hill. It was described as "a chaste and tasteful structure." It is a pity it has disappeared. In the course of its construction the architect made, from the gradually rising wall of the building, the interesting and comprehensive panoramic sketch of the City of Melbourne which hangs in a place of honour in the Barry Hall of the Public Library today.

Although the ecclesiastical field provided Mr. Jackson with much scope, it did not occupy his attention to the exclusion of other projects. In 1844, while St. Francis's was still working its way to completion, he joined forces with Robert Russell in a design for the first stone bridge over the Yarra. A premium for plans and estimates was offered. A condition of the competition was that the structure should be built upon elliptical arches. The design of Russell and Jackson fulfilled this condition, with a single arch of wide span, and viaducts on either side of the river arranged to support the arch. These viaducts were to lead to the bridge= from the raised roadways on either side, giving direct trans-communication. The estimated cost was 12,000 pounds, with the formation of the roadways 600 pounds and the filling up of the approaches 1,000 pounds. For their pains Russell and Jackson received second prize

Mr Jackson's consolation for this disappointment came when his services were engaged for the erection of the Melbourne Hospital. Bridge and hospital were to be adjudged on the same day, and though he had been unsuccessful with the bridge the hospital kept him well in the public eye. March 20, 1846 was made the expression of a great public demonstration. A large procession of colonists wound its way first to the river and then to the hospital site, where the foundation stone was laid with great solemnity and rejoicing. Mr Jackson was directed to construct the building in the cheapest possible material, but he made a commendable effort of it in the pleasing Tudor style that is still to be detected in the oldest portion of the Hospital that we know today. In 1847 another important milestone in Mr Jackson’s career was the building of the first St Patrick's Hall, which soon achieved unexpected prestige by becoming the first Parliament House of Victoria. It revealed to a marked degree the eclectic spirit typical of early colonial architecture; and though perhaps the least successful of Mr Jackson's works it was generally regarded as a fine addition to the 12 year old city's architecture. Mr Jackson was the originator in Melbourne of the Tower House, a substantial two storey structure topped by an imposing tower flanked by wide verandahs and balconies. The Tower House used by Governor Hotham during his brief regime, and it set a popular vogue in domestic architecture. One has not to travel far in any of the older suburbs to meet many excel-lent examples of this domestic style.

With the new era that began with gold, there came the era of great public buildings, with many enthusiastic architects of a younger generation entering the field. Probably feeling a little old-fashioned in methods and ideas and well satisfied with the share of work that had come to him in his ten years of architectural pioneering. Mr. Jackson decided to leave the works of the future to younger men. Consequently, after 1850, we find him living mostly in retirement in St. Kilda, until he left the colony in the early sixties to visit once again the land of his birth. Even then, however, the land of his adoption was ever his first concern, and we find him taking an active interest in the affairs of Melbourne. When in 1868 John Pascoe Fawkner made some remarks concerning the founding of the colony. Mr. Jackson at once replied from England, refuting Fawkner's statements in an extremely interesting and erudite letter, which threw much light on the birth of Melbourne.

Mr. Jackson died at Enfield, Middlesex, on May 7, 1876 at the age of 70 years. The fact that his overseas residence was known by the name of "Yarra House" shows that his thoughts were frequently turned toward Australia.

(The first article in this series appeared last Saturday. The third will be published next Saturday.)