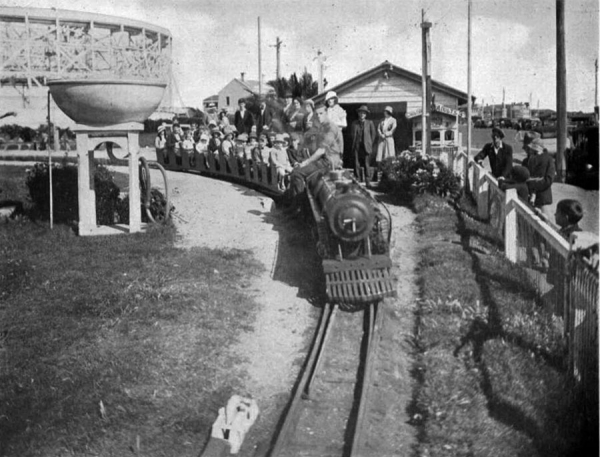 From the 1880s onwards miniature railways were often installed in amusement parks and fairs around Melbourne as a form of entertainment for young children.

From the 1880s onwards miniature railways were often installed in amusement parks and fairs around Melbourne as a form of entertainment for young children. Aerial photographs indicate that the first miniature railway on this site was constructed sometime after 1913 at the rear of the Palais de Danse Pictures. The track was laid in a circular form and was surrounded by a low post and rail fence set within a grassed and landscaped area.

Aerial view ca 1940-50When the Palais Pictures was rebuilt in 1927, the track was relocated further west to enable a car park to be built at the rear of the new theatre building. The new track circuit was greatly increased in length forming in plan a long rectangle with curved ends, running along Jacka Boulevard. The entrance to the ride was behind the kiosk at the corner of Cavell Street.

In the booklet St Kilda the Beautiful issued by the St Kilda Shore Publicity Committee in 1931 the ride was described thus: A real railway. with its puffing steam engine. tender and carriages. a properly laid track, complete with signals, bridges and tunnels - exactly like a real modern railroad, but without the attendant dangers of the latter. Thousands of kiddies patronise this, their first choice, and experience its thrills, whilst many parents, on the pretext of "looking after" their bairns, find this as an excuse to share the delights of their offspring. 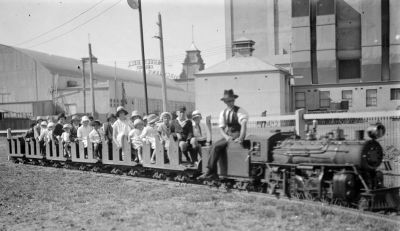