Amendment C25 had been gazetted on 1 November 2002. It introduced, into the Port Phillip Planning Scheme, new policies that supported the cultural significance, use and operation of the Esplanade Hotel. The amendment was (and continues to be) ground-breaking in its effort to enshrine the Espy's continuing cultural use as one of the key values to be protected in any development approval. The developer now had clear guidelines for what would be allowed on the site and the public's expectations about the Espy’s continued operations. Its planning application did not respect those guidelines and expectations.

In accordance with the planning objectives, the new lessees had prepared a management plan, detailing the hotel’s access, operational and service needs. It was clear Becton’s application ignored those needs and would strangle the Espy as a live music venue. The new building would seal off the hotel’s internal loading areas and access to the main stage, compromising its operations as a pre-eminent live music and comedy venue.

Significantly, and contrary to the spirit and letter of Amendment C25, Becton’s 10-storey apartments design proposed to demolish the beloved and (local) heritage-protected Baymor Court and any other buildings outside the lease-line, including two wings of the Espy Hotel.

Council received 31 objections, including one from Esplanade Alliance and one from VicMusic, a not-for-profit organisation established to represent and promote the growth and development of original contemporary music in Victoria.

Once again media interest focused on Council’s looming decision – just as it had back in December 1998 when Council was to decide on Becton’s first application, its 38-storey tower.

Developer cops a blast over Esplanade proposal, reported Farrah Tomazin in The Age, 3 February 2003.  A week later, on 10 February 2003, she led with: Another big night for The Espy, one some may wish to forget.

On the day of the Council meeting, 10 February 2003, news on radio stations 3AK, 3AW and 774 ABC reported the pending decision periodically throughout the day and announced the outcome that evening.

Council voted to refuse the application because of the impact on the hotel’s operation and the demolition of a heritage building. It argued the proposal compromised its planning guidelines. Councillor David Brand spoke in favour of the refusal, saying “It is extremely disappointing to me, in fact it’s dumbfounding to me, that after all the discussions and negotiations and hearings and investigations and expert opinions and warnings, over all this time, that the application before us still falls so far away from satisfying the objectives of the planning controls.” 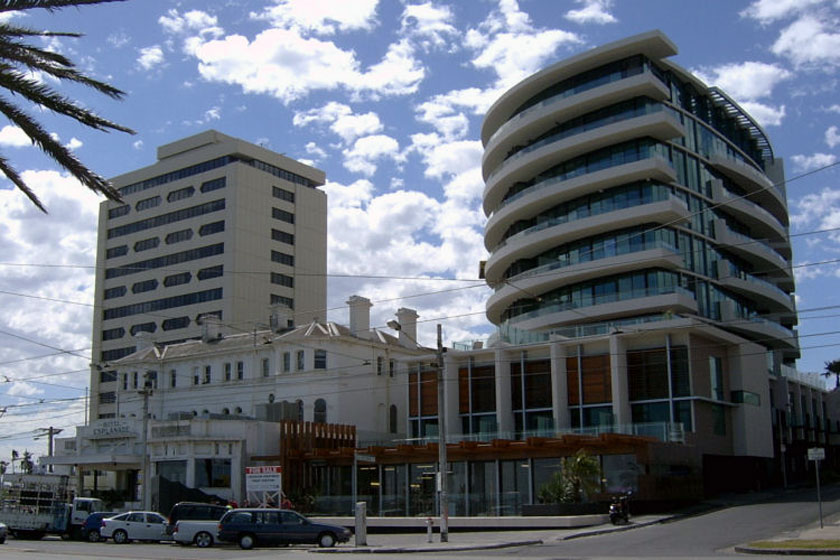 Artist's impression of the proposed 10-storey developmentPort Phillip Mayor Darren Ray said the next day: “Becton has failed to respond to the heritage controls, and their plans put the ongoing hotel use in jeopardy. From the time they submitted their plans last year up until the meeting last night, Becton have declined to make any revisions or improvements to their application. This clearly shows a lack of willingness to play ball. Indeed, what was even more telling is that they did not even bother to speak in support of their application at last night’s meeting.”

Becton warned it would appeal, claiming the Victorian Civil and Administrative Tribunal (VCAT) would be better placed to make an independent and objective decision.