Successive developers had been more interested in the profits to be made from developing the Espy Hotel site than from running the pub, which sat at the front corner of the foreshore land. They had allowed the hotel to run down, channelling its income to interest payments rather than to maintenance. This was particularly evident under Becton’s ownership. The hotel’s neglect had been raised at the Esplanade Hotel Working Group meetings. To survive, the Esplanade Alliance reasoned, the pub’s business had to be separated from its backyard development potential.

As Council moved to draft an amendment to its planning scheme that would recognise the cultural significance of the Espy and establish revised height controls for the whole site, the Esplanade Alliance moved to rescue the hotel. Its view was that the proposed planning guidelines, whilst most welcomed, would be insufficient, on their own, to protect the Espy and its eclectic cultural use. Nor was the developer the right entity to safeguard the pub and its culture.

The Espy’s survival needed the input of a broader range of stakeholders, including customers, admirers, artists, and local and State government. Thus it pursued the idea of a Community Trust that could either lease or purchase the Espy Hotel, at market rates, ensuring it would never again be held hostage to the development ambitions for the rest of the site.

In December 2000, the Esplanade Alliance released a discussion paper, The Esplanade Hotel Management Plan, which was “intended to stimulate thinking about the management models that would best assist the perpetuation of a place of urban cultural significance.”

The Council, the Department of Infrastructure, and surprisingly Becton Corporation supported the idea of some sort of trust buying the Espy. Council agreed to provide $10,000 for the Esplanade Alliance to scope possible models.

Separating a cultural icon from its backyard development potential

The Esplanade Alliance met with lawyers and business consultants to canvass a range of ownership options and explored fundraising vehicles for the necessary purchase funds. It also met with Becton. And its message to the community and to the media was that the Esplanade Alliance wanted to buy the hotel.

By March 2001, the Esplanade Alliance had the outline of a cultural organisation that could seek charitable trust status and could raise funds to buy the Esplanade Hotel and run it in accordance with specified current and intended uses, such as the opening up of the upper levels for multiple community and artistic purposes. It was preparing a fundraising campaign and negotiating with sympathetic licensees to run the pub side of the new vision.

But when Becton announced on 7 May 2001 that it would sell the Espy, fundraising had barely begun, and the legal entity, The Esplanade Hotel Foundation, was not yet complete.

The Espy for sale

Becton announced it would sell the pub's building on a 200-year leasehold arrangement. The pub would be sold in two lots – most of the pub areas on the ground floor as one parcel (with the exception of the kitchen wing) and the two upstairs levels as a second parcel. Becton would keep the rest of the site for redevelopment. Becton’s Hamish MacDonald told the Herald Sun’s Rachael Hodder that the Esplanade Alliance's interest in the site had prompted the sale (Council opts for 10-storey Espy, 9 May 2001, page 31). 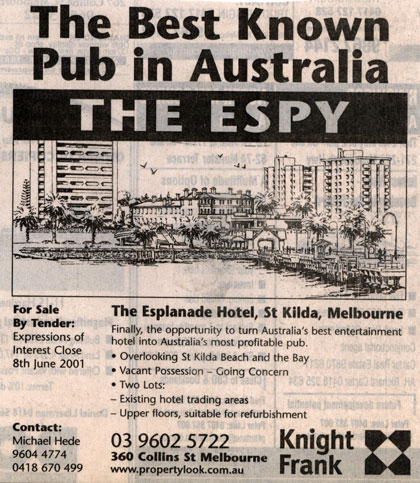 The group welcomed Becton’s announcement. “The sale is precisely what we have advocated,” Kate Shaw told the media, and indicated the community group's interest in purchasing the hotel.

Locals in bid to buy Espy, wrote Andrea Carson, The Age, 8 May 2001. Locals seek to buy back their pub with no peer, said the Melbourne Express, 8 May 2001, page 2. Street Fights: in the thick of it they celebrate the saving of a community icon was the title of Andrea Carson's feature on the Espy Hotel in The Age, 13 May 2001, page 4. Saving grace of an icon is how Mike Bruce reported it in MX-Melbourne, 16 May 2001, page 22.

However, the sale had come earlier than anticipated. Whilst working towards this very goal, the Esplanade Alliance did not, in early May, have the legal entity and funds in place to bid for the pub.

It had to review its strategy. The imperative was to see the pub bought by someone who understood its cultural significance and would support and nurture its live music and comedy culture. To this end the Esplanade Alliance could be an influencer, building on its high media profile to publicise its vision for the pub as widely as possible. Or it could be a direct player, either as a buyer or as a broker to facilitate purchase by a sympathetic consortium or individual.

It decided to be a buyer.

It was unlikely, it reasoned, that the two lease parcels would be bought separately, effectively splitting the building. Thus, anyone who bought the pub would inherit the long-abandoned and uninhabitable upper floors of the hotel. A partnership with Esplanade Alliance, whose reputation and vision could be leveraged to raise public and philanthropic funds for refurbishment, had to be beneficial to an astute operator. In exchange the Esplanade Alliance would seek joint decision-making power over the future direction of the Espy.

Once the decision to buy was made, the group moved quickly to finalise the legal status of the Esplanade Hotel Foundation, identify potential financial and cultural partners, select Foundation directors, seek letters of support, and write to selling agent, Knight Frank, requesting the tender documents.

The Esplanade Hotel Foundation was positioned as an innovative, legally sound financial body established to secure the Esplanade Hotel’s continuing evolution as an incubator of new, experimental and alternative cultural activities and, if necessary, to back this vision with funds raised from interested individuals and organisations. 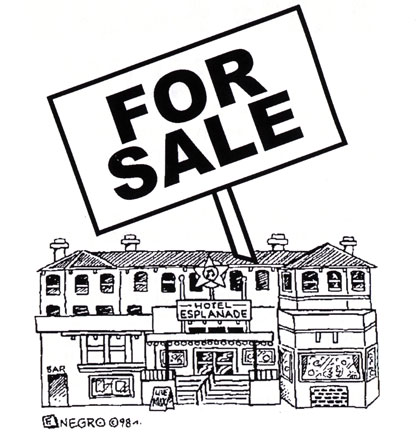 On 8 June the Foundation lodged an Expression of Interest in the tender process for the Espy. It outlined its intent to bid in conjunction with one or more commercial partners in a public-private joint venture. It would delegate, by agreement, the management of the hotel to commercial operators whilst using its expertise, community support and cultural organisation status to bring a range of activities to the upper floors. And it would undertake to raise the capital necessary to achieve this.

Becton accepted the Expression of Interest and provided the Esplanade Hotel Foundation with further relevant data to enable it to move to a tender.

The Age reported the bid: Alliance makes offer on Espy, Patrick Donovan, 16 June 2001. The following day, The Sunday Age editorialised about Placing a value on places we love (17 June 2001, page16), using the fight to save St Helier’s convent in Abbotsford and the Espy Hotel in St Kilda as examples of how “important is the public’s need to assert its connection with a particular place and to honour the significance of this connection . . . Dollar values cannot always be placed on what we love most. When the market attempts to do so, it forces communities to define what it is they want and to work together to achieve it. In these struggles, the city is continually redefined – and rediscovered.”

The Esplanade Alliance appealed to Espy punters and performers, and to local and Melbourne-wide citizens to pledge funds towards its vision, whilst it negotiated with reputable commercial operators, community and cultural organisations and banks to pull together a valid, market-rate bid for both parcels.

On Sunday 24 June, five days before the tender was due, it held a rally at the Espy to raise support for a joint community and corporate ownership of the landmark pub, even suggesting it made sense for someone amongst the commercial bidders to consider a partnership with the Esplanade Alliance.

Esplanade Alliance member and Espy musician from Loin Groin, David O’Brien, told the rally: “this is a cultural institution we cannot afford to lose. It is an absolute icon of St Kilda, of Melbourne, and of Australia’s music and comedy live performance culture . . . It is not the place for another boutique hotel, upmarket pub, glitzy disco complex, pokie palace or exclusive club.”

The message was clear. Any buyer who ignored the community’s vision, should the Foundation bid fail, would face an uphill battle if it chose to change the pub and its culture dramatically.

On Friday 29 June, the Esplanade Hotel Foundation, in partnership with experienced owners of popular pubs - Andrew Lewis (Lincoln Hotel) and Andy Comey (Spy Bar) - submitted its tender for the historic pub. The bid was commercially competitive, realistic and viable and met public expectations for the future of the hotel. It offered a novel private/public model for financing and operating its vision.

Whilst the $24,000 raised in pledges was not included in the tender bid, it would be called in should the Esplanade Hotel Foundation win to form the financial and moral foundation of the next stage of the Espy’s evolution.

The Esplanade Alliance urged Becton to expand its tender assessment criteria to consider what a prospective new owner would do with the hotel. If Becton was sympathetic to the hotel and its culture, as it had claimed in its publicity over the years, then its choice should not be made solely on the highest offer.

The future of the Espy now lay with the developer, at a time when St Kilda was at a gentrification cross road, with new projects springing up across key beachside areas. Some were more in keeping with the suburb’s eclectic mix; others strove to reshape it.

The Knight Frank letter of 7 August 2001 was short and to the point.

The Esplanade Hotel Foundation tender was not successful. It was the first of the bids to be rejected by Becton. New owners – Chevron nightclub managers Paul Adamo and Vince Sofo – were announced on 20 August 2001, just as the Amendment C25 public exhibition period drew to a close.