7 Gateway to the Bay

In March 1999 a new tower vision threatened the Espy. While the Port Phillip Neighbourhood Amendment C5 process continued, unencumbered by Becton’s rejected 38-storey amendment, and the City of Port Phillip prepared for its second election since democracy had returned to local government, the Kennett State Government released, for public comment, a document entitled Inner Melbourne Foreshore Urban Design Framework: Gateway to the Bay.

Its vision proposed that St Kilda and Port Melbourne become unique waterfront high-rise urban centres – inspiring the quaint analogy of ‘Bookends’. An artist’s impression of this foreshore vision showed a high-rise tower on the Esplanade Hotel site. Having said in December 1998 that it would not intervene, the State Government returned with its own tower vision.

Watch the response to this announcement.

The Herald Sun forecast War looms on bay plan (Scott Thompson, 3 March 1999) and quoted Dr John Spierings from the Esplanade Alliance: “It’s about who has planning rights in a local government area. . . is it the local community and its council or is it going to be taken over by the State Government and its planning policy?”

art by Deborah KellyThe State’s tower bookends, proposed for the foreshore area that falls within the City of Port Phillip, clashed with the Council’s vision as articulated in its Amendment C5, and with its decision, a few months previously, to reject Becton’s tower proposal for St Kilda. Becton’s Hamish MacDonald told Jon Faine (3L0, 4 March, 8:30am) he had not seen the document and insisted Becton did not have a new application afoot.

The City of Port Phillip condemned the State's proposal as an open invitation to developers to build big and build high and a blatant nod to tower development applications already in the pipeline. It claimed the State’s document was a direct challenge to Council’s planning authority over the foreshore and its extensive three-year consultations and reviews to prepare Amendment C5, which was due to come before a Panel review mid-year.

Gateway to the Bay was placed on exhibition in mid March. Port Phillip pushed for a Joint Working Group to be set up with representatives from both the Council and the State Government’s Department of Infrastructure to consider the relationship between State's vision and Council’s Amendment C5.

At around the same time, on 20 March 1999 local council elections voted in an Esplanade Alliance candidate. David Brand, heritage architect and committed supporter of St Kilda’s live music culture, would play an important role in determining the future of the Espy, not least the drafting of a site-specific planning scheme that would protect the pub’s eclectic cultural use. But that would come later. In the early months of 1999 his challenge was to protect local planning rights from being taken over by State Government aspirations.

Incensed that Gateway to the Bay put Becton’s rejected skyscraper proposal back on the agenda, the Esplanade Alliance swung into action once again. This time, as part of a wider Port Phillip coalition, it joined forces with protesting Port Melbourne groups, under the banner Gateway: Wrong Way. At the St Kilda end, Esplanade Alliance produced and distributed information to raise awareness of Gateway to the Bay. It urged people to write to parliamentarians, attend Council information sessions in St Kilda and Port Melbourne, and submit objections to express their outrage. It set up street stalls in Fitzroy and Acland Streets, once again, to collect thousands of signatures.

The local press followed the campaign:

In the midst of the exhibition period, Becton Corporation wrote to Council, in an apparent change of heart, to say it would participate in the Council’s Esplanade Hotel Working Group, which it had labelled a ‘joke’ when its 38-storey application was rejected in December 1998. Obviously keen to use as leverage the State’s latest support for high-rise towers in St Kilda, Becton wrote: “The release of the government’s Gateway to the Bay urban design framework also means that wider regional issues will now have to be factored into the (Espy Working Group) process.”

art by Deborah KellyBy the end of the six-week exhibition period, around 6,000 opposing submissions had been filed, including a submission from the Shadow Planning Minister, John Thwaites.

It was initially contemplated that submissions about Gateway to the Bay would be referred to an Advisory committee that would then consider them it in conjunction with submissions to Amendment C5. However, the report of the Joint Working Group, released in June 1999, recommended abandoning Gateway to the Bay in favour of Council’s Amendment C5 process, with the proviso that Council prepare ‘urban design frameworks’ for St Kilda and Port Melbourne. These frameworks would articulate clear design objectives that would provide a basis upon which a proposal to exceed the existing height controls could be approved. And it would be this revised Amendment C5 that would go to a Panel. Gateway to the Bay would not be considered a separate document and would not be referred to an advisory committee.

Whilst the report sounded the death knell for Gateway to the Bay (Gate closes on high rises, Port Phillip Leader, 14 June 1999, page 5), future development parameters for the Espy were still in doubt. And with a weaker Amendment C5 going to the Panel, it seemed certain Becton’s high-rise dream would move a little closer to reality.

The revised version of Amendment C5 was put on public exhibition from 29 June to 16 July 1999. Those who had made submissions to the Gateway to the Bay, or to the initial Amendment C5, were invited to respond to the revised Amendment C5 instead.

The independent Panel, which had been appointed in May, met from 12 August to 14 September 1999. It received more than 180 submissions. Preferred height limits emerged as the key issue during the sixteen-day hearing. Developers urged the Panel to loosen controls.  (The Age reported from the hearing: “In a show of unity, the developers with interests in the City of Port Phillip – Becton, TEAC, Sunshine Views, Mirvac and MAB – have employed planning specialist Chris Canavan, QC to represent them at the hearing.” (The players in the planning puzzle, The Age Property, 12 September 1999, page 2)

The Espy site became the testing ground for how height might be set, interpreted, and assessed in the new planning schemes sought by the State Government.

Both Becton Corporation and the Esplanade Alliance used the Espy Hotel as an example of the type of design and structure that might be delivered by their differing approaches to planning.

Becton argued for the removal of any prescriptive maximum height limits in the revised Port Phillip Planning Scheme, stating that they were too restrictive and would compromise innovative design. It presented a 27-storey tower model for the development site.

Esplanade Alliance cautioned against confusing good design with height. It argued that at some point in a development, height, whether absent or prescriptive, would inevitably become an issue. Height, it said, was a concern that could not be legislated away. It argued for the Panel to retain the existing six-storey height controls and leave it to an Esplanade Hotel Working Group to find a shared vision for what might be appropriate on the site.

In an internal email to Esplanade Alliance members, Councillor David Brand wrote: “the future development parameters for the Espy site should be left to a working group, properly constituted by Council, rather than being put to the Panel to decide.”  Read the Esplanade Alliance submission.

Whilst the Panel was preparing its report, the September 1999 State election gave Labor a small margin over incumbent Jeff Kennett, putting the government on hold whilst alliances were negotiated to secure a Labor victory. Four weeks later, on 20 October, a Labor government was sworn in. Within days, the new Planning Minister, St Kilda’s local member John Thwaites, indicated there would be a very different approach to planning. On 14 December, Thwaites announced interim height controls on Melbourne’s foreshore and reinforced the six-storey limit on the Esplanade Hotel site, effectively killing Becton’s 27-storey tower proposal. The twelve-month reprieve would allow Council time to set up the Esplanade Hotel Working Group to consider the future of the Espy site – as proposed a year earlier when Council rejected Becton’s 38-storey dream on 15 December 1998.

Watch the reaction to the announcement on TV news that night. 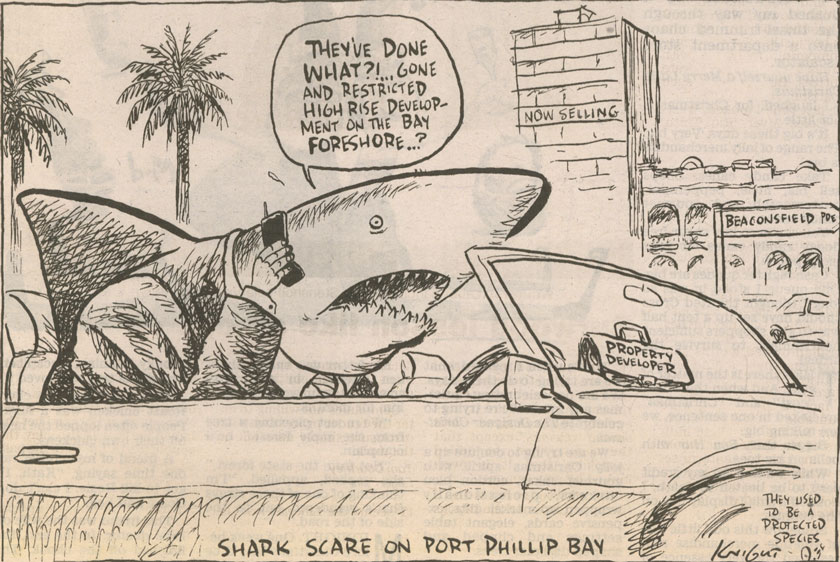