War had been declared. The battle lines were drawn. The public had six weeks, from 8 October to 20 November 1998 - the duration of the amendment’s exhibition period - to save the Espy.

Becton was not prepared to negotiate on height. “The Espy Alliance calls it arrogance and (Councillor) Dick Gross calls it planning blackmail,” Becton’s Hamish MacDonald told Mike McGeary at the Port Phillip Leader (Tower Struggle, 21 September 1998). “But we think the Esplanade Hotel site is a strategically important landmark site in Melbourne and it would be diminished by compromised design.” 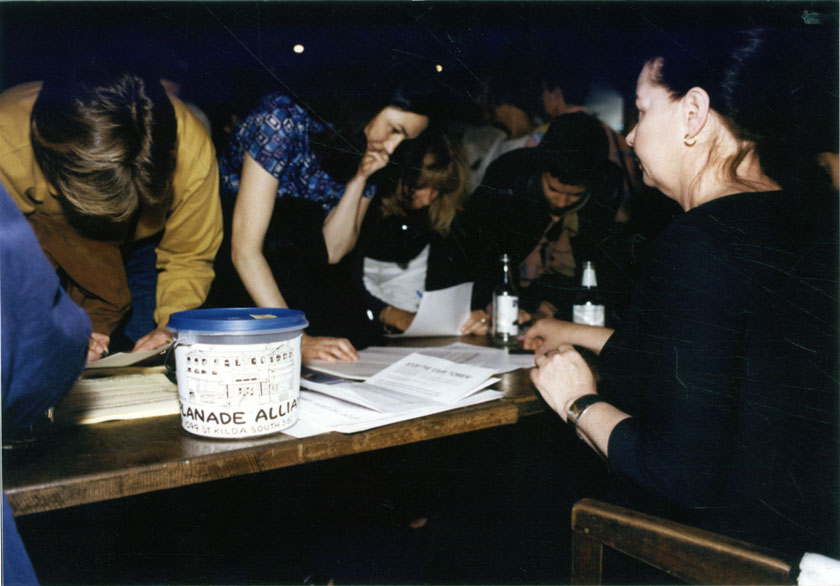 signing petitions October 1998The Esplanade Alliance mobilised to:
• Increase awareness of Becton’s proposal to build a 38-storey tower immediately behind the Espy, starting where the Espy kitchen now stands.
• Motivate as many people as possible to write objections, in order to flood Port Phillip Council with an unprecedented number of letters and submissions.
• Attract media attention to take its message to a wider audience and generate public awareness across the State that would dissuade ministerial interference. 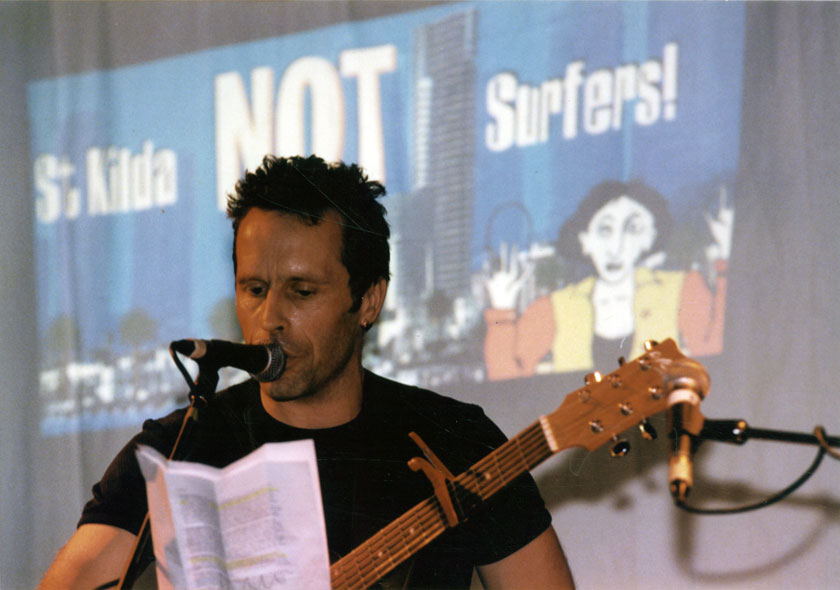 Mark Seymour, 18 October 1998The first public meeting was held at the Prince of Wales Bandroom on 18 October 1998, with support from Paul Kelly, Mark Seymour and internationally renowned street performing troupe Strange Fruit. The bandroom was full. People lined up to sign petitions and letters of objection. They donated funds to support the campaign. They cheered at the sentiment expressed in the speeches.

Read what was said at the meeting: Speeches by Kate Shaw and David Brand for Esplanade Alliance and by Mark Seymour.

“It’s gone way beyond local residents saying ‘not in my backyard’,” Esplanade Alliance’s Krystyna Kynst told the Emerald Hill Times (Hundreds likely at last-ditch rally against Espy tower, 11 November 1998).  “It concerns all of Melbourne. We’ve got visitors to the area who say they might stop coming if this goes ahead.” 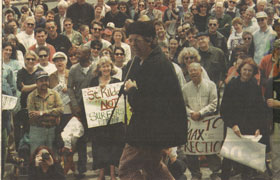 Rally at the Espy Photo: Robert HudsonSpeakers at the rally (15 November 1998) expressed their concern about the diminishing power of local government in Victoria. The question many were asking was what would happen if Port Phillip Council decided to respond to community outrage and reject Becton’s proposal outright? Could it do so confident the Minister for Planning and Local Government, Rob Maclellan, would not call in the proposal and eventually give Becton what it wanted?

When the press reported the rally, it estimated some 1,000 protesters had gathered against Becton’s tower proposal:

Fans keep on rocking to save the Espy, Katherine Towers, Iain Shedden, The Australian, 16 November 1998.

Watch the rally on TV news.

Listen to what Mark Seymour had to say to 3LO's John Faine.

The battle became more heated as the State Government’s Minister for Small Business and Tourism, Louise Asher,  lodged her objection to Becton’s proposal with Port Phillip Council (Tourism Minister joins Esplanade tower protest, Sian Watkins, The Age, 21 November 1998). The National Trust wrote to its members in the St Kilda area urging them to protest against the proposed development.

When submissions closed, Council had received some 5,368 signatures on the petition and 6,324 individual submissions. Of these, only 618 supported the Becton proposal. No application in the history of St Kilda, or in the history of Melbourne, for that matter, had generated such a response.

Read Esplanade Alliance objection to Amendment L68 and read what others submitted.

“The fight to retain the Espy is symbolic of the overall fate of St Kilda. If the Espy goes under, then you’ve got to ask big questions about the future of the entire suburb.” John Spierings, former Mayor of St Kilda (The only way is up?, Jacqui O’Leary, The Big Issue, 23 February 1998, page 18).