On 24 June 1998, Becton Corporation submitted a planning amendment application to the City of Port Phillip, seeking to remove the current six-storey height limit to allow a tower of up to 38 storeys on the site. It sought to demolish several 'A' grade heritage buildings including Baymor Court and parts of the Esplanade Hotel, and to rezone the site’s uses to include retail. Becton claimed that without a high tower development, it would not be able to afford to refurbish the Espy.

"I want this to be a work of art. I want to have the same reaction as when you see a Gaudi building and say, ‘No-one built that to make a buck’.” Hamish MacDonald, Becton Corporation, Antipo Design, Winter 1998, page 2.

Read Becton’s submission to Council and its press release.  Watch the reactions to Becton’s proposal on TV news.

The Esplanade Alliance struck back, calling the proposal 'Godzilla’. The press ran with it.

Radio station 3AW spoke with Esplanade Alliance’s Kate Shaw and Becton’s Hamish MacDonald. The interview transcripts reveal the true nature of the deal Becton had in mind in exchange for keeping the Espy’s live music culture. On radio, and in the press, Ms Shaw accused Becton of luring people into a Faustian contract, trading the Espy for “your soul in the form of a tower.” (The Espy tower: will it go up, up or away?, Sian Watkins, 26 June 1998).

Becton’s proposed amendment to planning controls for the Esplanade Hotel site was lodged as a submission to Amendment C5 and named L68/C11. Council met on 19 August 1998 to consider whether it should place the proposed amendment on public exhibition. 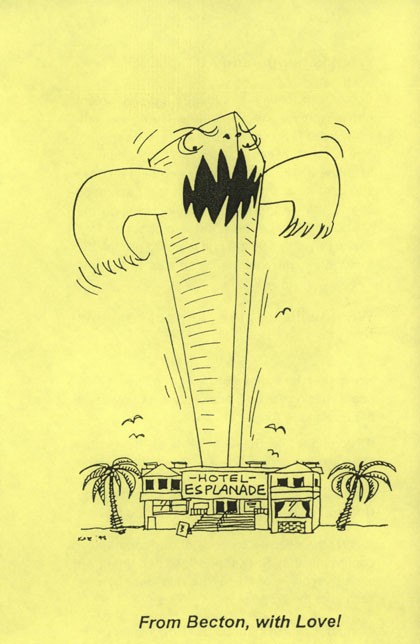 Image from Esplanade Alliance flyer, July 1998 by KazBecton’s application had come at a transition time in the planning guidelines. There was little point in amending the current scheme, as it was about to be replaced. The new scheme was yet to be gazetted. There was no strategic basis on which to assess a general proposal for 38 storeys on the site.  At the same time there were the obvious risks that, if Council did not exhibit Becton’s audacious application, the powerful corporation could, and would, approach the Minister who might call it in. Port Phillip Council was well aware that the State Government could override its planning authority at any time and lock out the local community from further input.

As a first step Council sought a higher degree of clarity and detail and proposed a meeting with Becton to address outstanding issues, deferring the matter for one month. The developer, emboldened by a favourable political climate and the pressure on the City of Port Phillip to dismantle its mandatory height controls in favour of performance-based criteria, refused to negotiate on height.

On 23 September 1998 Council voted to place the amendment on public exhibition. A formal Planning Scheme amendment process, it reasoned, would ensure, at the very least, the widest possible public consultation. Its decision was accompanied by a statement that outlined its concerns about the height of the proposed tower and the demolition of several historic buildings.  It also pointed to the high level of community concern.

The developer’s move to use its design proposal to challenge height restrictions on the St Kilda foreshore ignited the brewing tug-of-war between the State Government and the City of Port Phillip. To the issue of which level of government should drive local planning outcomes, the tower proposal added debate about design and the desirability of skyscrapers on the beach front.