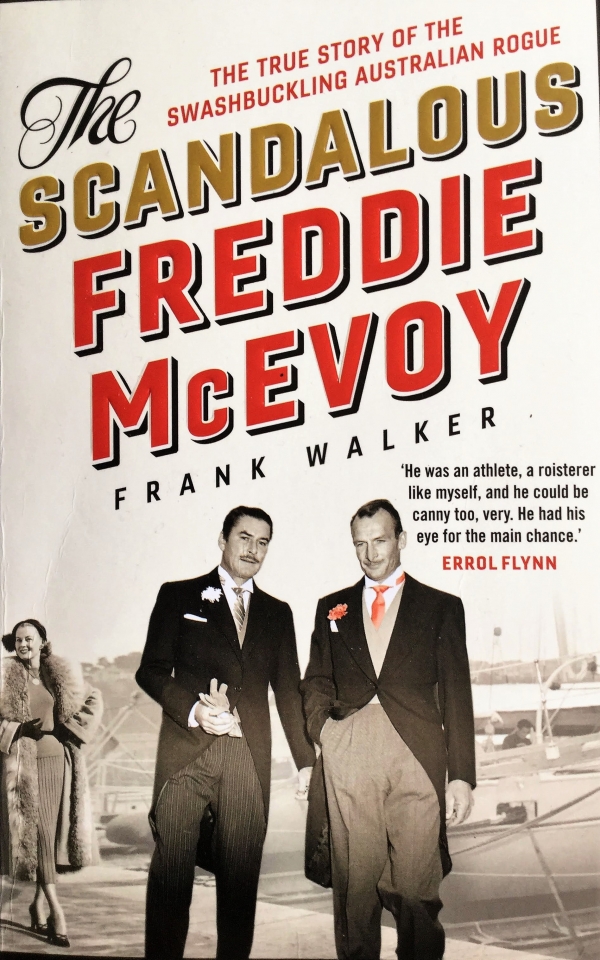 Freddie McEvoy’s only connection to St Kilda was being born there, but his life was such a ripping yarn, we claim him as a St Kildan.

Freddie McEvoy swashed and buckled his way across Europe and the US in the 1930s and 1940s before meeting his end in 1951 when killed by pirates while sailing his yacht Kangaroa off the coast of Morocco.

Freddie was born in St Kilda in 1907. In 1900, his father, also Frederick McEvoy, was a wealthy, middle aged widower when he met and married the young New Zealander Violet Healey, a chorus girl in Sydney’s musical theatre scene. The McEvoys held extensive pastoral properties in NSW and Melbourne mansions including Studley Park House – the family home of grazier grandfather James McEvoy , and Villa Alba built by a McEvoy son-in-law.

Freddie’s father died in 1913. Violet, now an extremely moneyed young widow, took off to Europe with six year old Freddie and his brother. Young Freddie grew up in luxury in St Moritz, Switzerland protected from the horrors of WW1. Following a private education in England he first met lifelong best friend Errol Flynn when, aged nineteen, he briefly returned to Australia.

In Europe, Freddie, never known to have had an actual job, spent summers on the Riviera, winters on the slopes of St Moritz and spring in Paris, all the while courting wealthy widows and divorcees to finance his expensive playboy lifestyle – easy to do as he was six feet two inches tall, athletic, devilishly handsome and oozed charm.

When, in 1935, Freddie won the European Bobsled Championship, the British noticed and invited him to join their 1936 Winter Olympics team, overlooking the tiny technicality of his being Australian. At the opening ceremony watched by Adolf Hitler, Freddie led the British Olympic team into the stadium and on the 12 February, his 29th birthday, he captained the British four-man Bobsled team which won a bronze medal, thus making Freddie the first Australian ever to win a medal at a Winter Olympics.

At the 1937, 1938 and 1939 World Bobsled Championships, Freddie won several gold and silver medals. He took up car racing, driving his Maserati into fourth place at the 1936 Swiss Grand Prix, the Maserati being emblazoned with the Australian flag. His need for speed had him nicknamed ‘Suicide Freddie’. When he wasn’t winning medals, he did playboy things like enjoying the casinos and seducing rich women.

Freddie’s first marriage in 1940 in Paris was to an American, Beatrice Cartwright, and thirty years his senior. Her age advantage was matched by a financial advantage. She was heir to the Standard Oil Company fortune. France was occupied at the time and the couple wanted to leave for America. As the US was still neutral, Beatrice had no difficulty, but Australia was officially at war with Germany, so Freddie was stuck in France. Somehow he obtained an exit visa from the Vichy French, probably approved by the Germans. This event and his later associations with dubious Germans led to suspicions that he was a Nazi sympathiser.

Once in the US, he lived comfortably with Beatrice in a ten bedroom penthouse atop New York’s Waldorf Astoria Towers but he soon took off to Hollywood to join his mate Errol Flynn at Errol’s Mulholland Drive Ranch House where the two men engaged in industrial strength cavorting. In a show of mateship, Freddie was a defence witness at Errol’s 1943 statutory rape trial. Errol was acquitted.

Beatrice divorced Freddie in 1942. He next married 18 year old Irene Wrightsman whose father had made a fortune in Texas oil. The father took one look at Freddie and cut his daughter off without a cent. The couple had a daughter in 1944 but marriage to the unexpectedly penniless Irene didn’t last long. Throughout his American sojourn, Freddie was monitored by the FBI, forever suspicious of his German links.

At the end of the war, Freddie returned to France where he had a yacht in Cannes. He played the black-market and possibly smuggled jewels, cigarettes and liquor between France and North Africa. In 1945 and 1946, Freddie lived with Barbara Hutton the Woolworth’s heir, recently divorced from Gary Grant and at the time, the world’s richest woman. The American press unkindly labelled Freddie “The Big Dame Hunter”. He wanted to marry Barbara but instead she married Prince Igor Troubetzkoy .

In 1949 Freddie married the young and non-wealthy French fashion model Claude Filatre. Errol Flynn was his best man. In 1950 Errol married his third wife, Patrice Wymore in France. Freddie was his best man.

Freddie had purchased and restored a luxury yacht named Kangaroa. In 1951 he planned to sail it to the West Indies via the African coast with his wife and several crew members, none of whom had ocean sailing experience.

The yacht was shipwrecked on a reef off the coast of Morocco. In November 1951 when the bodies of Freddie, his wife, her assistant plus three crew members were washed ashore, local authorities (and subsequently a French Court) decided that Freddie’s body bore signs of violence inconsistent with drowning and determined that he had been murdered, prompting wild speculation in the international press as to what sort of contraband the yacht was carrying, possibly diamonds or guns. To whom or to where were the goods destined? No one knew if he was killed by surviving crew members, one of who was a former SS officer; or by pirates; or by African rebels? The yacht’s cargo was never found and no conclusion was reached as to who committed the murder.

The Australian Government paid for the funerals of Freddie and his wife and for years afterwards chased his mother and brother for reimbursement.

Where did all this roistering begin? On 14th February 1907 (appropriately!), an announcement appeared in the Argus advising the world that Mrs F A McEvoy had delivered a son at ‘Holyrood’ St Kilda Road. And there endeth Freddie McEvoy’s association with St Kilda.